A clean sweep at The Hindu Young World-Goodbooks Awards 2018

We're over the moon to have won in ALL four categories in The Hindu Young World-Goodbooks Awards 2018. Here are the full citations from the jury: 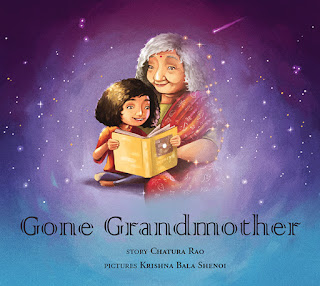 Addressing the subject of death and loss, especially for children, can be a challenging task. Chatura Rao's Gone Grandmother handles this theme with sensitivity, empathy and that is not easy to achieve in a picture book. The author poignantly captures the nuances of a young child’s puzzlement about her 'missing' Nani while portraying the special bond they shared. The splendid manner in which Rao juxtaposes the child's natural curiosity and youthful imagination to help her find her own answers is easily the book's greatest strength. Not to mention, the unexpected touches of humour that leave the reader smiling every now and then. The subtle, introspective illustrations complement the text perfectly, adding mood and tenderness to the story.
Gone Grandmother is a gem of a picture book that fills the spaces in the heart created by the loss of a loved one. What is remarkable is that it also creates a space where young readers can open up to their feelings and talk about difficult things.

NANCY RAJ for Maharani the Cow 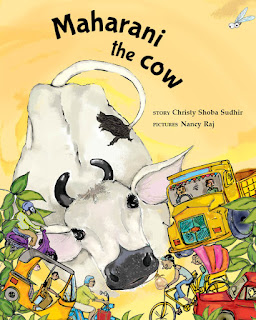 Nancy Raj’s illustrations for Maharani the Cow exemplify the true magic of the picture book format – they transport you to a world that exists beyond just the words on the page. A seemingly simple story of a cow obstructing traffic becomes the backdrop for a universe inhabited by a colourful cast of characters with their own little stories. The charm of Raj’s pictures lies in her treatment of familiar situations with her quirky style and subtle humour. Her observational details – be it the nonchalance of the cow and its antics or the mayhem caused by children in a school bus – make every situation infinitely more entertaining. By playing with shifting, dramatic perspectives, she removes the linearity of the narrative and creates an immersive experience for the reader. The design and format of the book also complement the illustrations. Ultimately, Raj successfully manages to take a succinct story and layer it with plenty of action and comic flair to keep young readers engaged over several readings.

MINI SHRINIVASAN for The Boy With Two Grandfathers 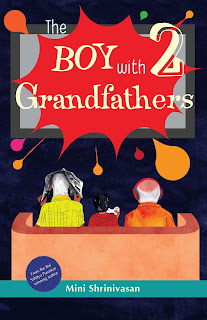 Mini Shrinivasan's The Boy With Two Grandfathers is about a boy dealing with the news that his beloved mother has incurable cancer. Shrinivasan's sensitive and insightful depiction of how the boy's two grandfathers rally to his aid lifts the story out of the ordinary. It has the courage to raise a subject that used to be dismissed, at least until quite recently, as inappropriate for children. The simple, precise and unadorned writing not only avoids the temptations of sentimentality and high drama, but also offers a much-needed recasting of men as nurturers. Shrinivasan's novel is sure to comfort and illuminate young readers, irrespective of whether they are in a similar predicament or not. It will serve to inspire similar courageous works in children's fiction. One can ask no more of an author or a story.

Devika Cariapa’s labour of love, India Through Archaeology: Excavating History, pulls off the 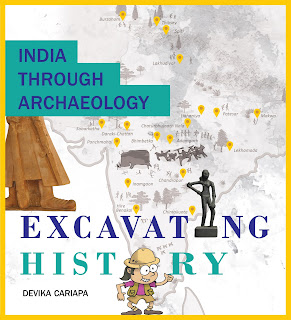 deceptively simple but enormously difficult task of encapsulating India’s past through the archaeological record. Foregrounding the archaeologist as a scientist who studies how humans lived, an intrepid adventurer who seeks to uncover lost civilisations, a detective who fills the gaping holes in our collective knowledge and a storyteller who assembles tales from the past, Cariapa surveys Indian history from the prehistoric times to the present. The purported scope and breadth of this work is ambitious and immense but Cariapa shows herself more than equipped for the task. The book is, in addition, a visual delight. India Through Archaeology: Excavating History is a very important work that not only fills a lacuna in books of this genre for young readers, engaging them in a non-patronising manner, but also proposes a strategy for dealing with history and archaeology in a more open and less contentious manner at a time when these have become hotly-contested fields.