On World Book Day, Tharini and Prince from Book Lover's Programme for Schools, had a storytelling at Sunshine Matriculation School, Mehta Nagar, Chennai. Notes from Tharini on an eventful morning...
Two hundred kids screaming, clapping and bringing the roof down is therapeutic. You come back slightly hoarse, but happy, contented and knowing for a fact that it was one of the best mornings ever. You should try it sometime! 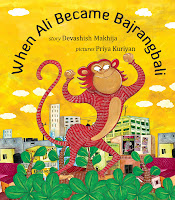 On March 1st, Prince and I went to Sunshine Matriculation School to tell Classes 1, 2 and 3 stories as part of World Book Day. Niveditha had called us earlier and asked us to tell three stories. We chose Hanuman’s Ramayan, When Ali Became Bajrangbali and The Sky Monkey’s Beard out of the list we had been given. Niveditha had evidently chosen an ideal theme, for when I began the session by asking the kids whether they liked monkeys, there was a resounding “YES!”. 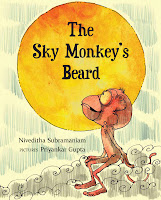 We started with the “Shake Shake Song” as all the kids shook and sang, clapped and jumped and stretched with us. Once everyone was happy with all the singing, I started on the first story of the morning. From Hanuman’s Ramayan, it was an easy transition to When Ali Became Bajrangbali, where all the kids got a kick out of the Meesaikaran’s long long moustache. Then it was time for another song.
This time, we sang “Five Little Monkeys” more or less in time with Prince’s guitar. Prince then started the story of the little sky monkey who wants to live on the land, rather than float in the clouds. To emphasise the point, he rolled around on the floor, much to the children’s fascination. We wrapped up the story telling session with one more song. And then, sadly, it was time to go home.
Thank you, Tulika, for giving us a chance to tell stories to such a delightful audience. We hope to do more story-telling sessions with you in the future!
Tharini Viswanath, BLPS
Posted by Tulika Publishers