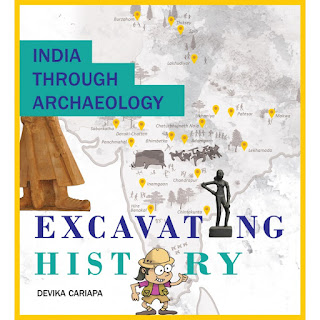 Most people think that a book on history is a surefire way to guarantee yourself a good snooze. We beg to differ. Excavating History is our attempt to make sure that you are awakened and refreshed and excited by history and archaeology.

Researched and written by archaeologist and writer Devika Cariapa and illustrated by Ashok Rajagopalan, this book packs in nearly 2 million years of human history discovered through archaeological artefacts and stories in only 160 pages!

Excavating History is a genre-bending work that is not only a reference book but also a fun-to-dip-into book, a fun-to-read book and an illustrated history book. Now, how many of these have you come across lately?

The author Devika Cariapa explains what inspired her to write the book: “When I was doing my Masters in Archaeology, I was fascinated that something as tiny and innocuous as a small piece of stone, a shard of pottery or a few random scribbled letters from the alphabet could have a tale from the past hidden in them. Also, so many of the stories of how our history was pieced together read like exciting mysteries or detective stories and I thought that children, especially, would enjoy them.”

A diamond in the making

Out of such musings grew the kernel of the book. It was like a diamond in the rough. With the editorial team at Tulika the manuscript was developed to the book that you see today. The entire process from the fascinating first draft to the final book took two whole years.

The editors at Tulika, Radhika Menon and Deeya Nayar, say that the idea was to keep the chatty tone which is the writer’s USP. So this was a focal point while editing the book. Deeya adds, “It is the most immersing and rewarding book I have worked on.” 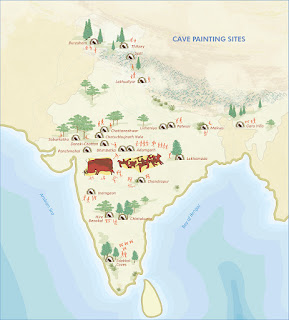 Next, a lot of editorial attention was paid to the format. In Devika’s words, “Right from the start, the team at Tulika and I agreed on the rather unique format of an illustrated resource book. That meant we had to … strike the right balance between all the elements — text, illustrations, photos, maps.”

One look at the book and you know it looks quite unlike any other book. A timeline appears at the top of the beginning of every chapter indicating the period to which it belongs. Then, there are these boxes which either give you more information or add a different perspective to the point.

If you skim through the book, these fact boxes are your best friends. Your eye will be drawn to another element on the page — the beautiful maps — which show the presence of prehistoric cultures, trade routes or the extent of empires.

One of the reasons it is not a snooze-inducing book is that it tells a story while juggling facts. For example: the reason why the capital of Delhi in its many avatars kept shifting a few miles here and there. This is fascinating because this was not usually how capitals behaved. They generally stayed put next to rivers. Historically, capitals were built next to rivers because people needed rivers for water and transport. So one theory is that ‘Delhi’ kept shifting its place because the river kept changing its course! (For the curious, this story appears on page 148.)

Of course, like any worthy endeavour, there were challenges. The format alone involved several rounds of discussion. Deciding what to retain and what to leave out was equally if not more tricky. Devika says, “The greatest challenge was to know what to leave out! Too much information would have had the kids reeling in boredom. But at the same time, I didn't want to miss out on interesting details.” 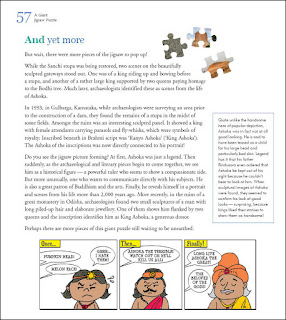 No description of the book can be complete without a word about Ashok Rajagopalan’s delightfully whimsical cartoons that pepper the pages. Of the elements in the book — the text proper, the fact boxes, photographs of prehistoric places or illustrated maps — the cartoons give the book such levity. They reimagine for us what life would have been back then. More importantly they appear to humorously comment on the story being told much like R.K. Laxman’s Common Man. What a delight!

Response in the media

By writing this book, the author Devika Cariappa wanted to write “a fun book that children would pick up without any prompting, dip in and out of, and not feel that they were reading a text book—something they would enjoy for the sake of it.”

From the responses in the media, we think this has been accomplished to a large extent. Anu Kumar’s review in www.scroll.in says, “For its part, India Through Archaeology brings alive in a vividly direct way, the magic, the mystery, and the many methods that make archaeology key to understanding history, the past, and thus, our own stories.” To quote the review by Geeta Doctor in The Wire, “…Devika Cariapa has used a rich repertoire of images and anecdotes to tempt her audience to follow her into the rabbit hole of history. She digs through mud, stone and brick to bring alive the story of the people of India by the material remains of their cities and settlements.” Blogger and writer Meenakshi Reddy Madhavan in The Hindu BLink review mentions, “It’s not often that a children’s book gets taken seriously, but this one deserves all the attention it has been getting. Excavating History is a history of India, but a scientific and comprehensive volume, using archaeological finds to do a quick rundown of what’s been going on in the subcontinent from the Stone Age downwards.”
By creating Excavating History we have tried to get two birds with one stone (no pun intended) — offer the child an introduction to archaeology and pack in enough to delight the adult.

Does this post inspire you to get your copy? Head to our online shop now!