It's all about food!

Fragrant marzwangan kurma, sizzling dosas, mouth-watering rice kannhi, juicy jalebis, bulging bondas… in deliciously delightful stories from across India. Here are Tulika's books with food that are sure to tickle not only the palate but the funnybone as well, and leave children ‘fed up’ and ‘fulfilled’ yet hungry for more!

What shall I make? written by Nandini Nayar and illustrated by Proiti Roy
Roll it, pat it, poke in eyes, stick on nose and ears — and a ball of chapati dough can turn into almost anything! The endearing illustrations follow the quirks of a child’s imagination.

Mazzoo Mazzoo written by Sandhya Rao and illustrated by Srividya Natarajan
Nazneen carefully cooks some fragrant marzwangan kurma for a special family dinner. But just when it is all ready, guests arrive - unwanted guests, who cleverly sniff out a good free meal. A warm, amusing folktale from Kashmir which captures life in a simple Kashmiri household. The illustrations use traditional Kashmiri embroidery motifs to provide ambience for the story. 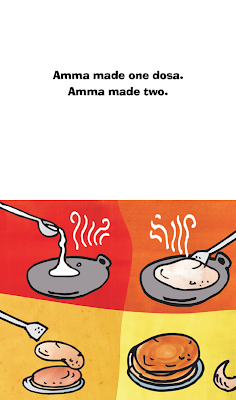 Dosa written by Sandya Rao and illustrated by Ashok Rajagopalan
Who ate the dosas? Amma makes dosas but they keep disappearing! A story in which children have the last laugh! They will also experience the fun and excitement of making the pictures move. There are instructions on how they can do that at the end of the book. This is the second in the series after Grandma's Eyes


Eecha Poocha written by Kala Sasikumar and illusrated by Ashok Rajagopalan
An endlessly entertaining cumulative tale from Kerala about Eecha the fly and her friend Poocha the cat. They make delicious rice soup. While Eecha flies off to fetch a jackfruit leaf with which to spoon out the soup, Poocha watches over the pot. But Poocha is hungry, so hungry. Aaaah.....! Children will love the lilting cadence of  the text. The illustrations take on a special quality, almost like moving pictures. 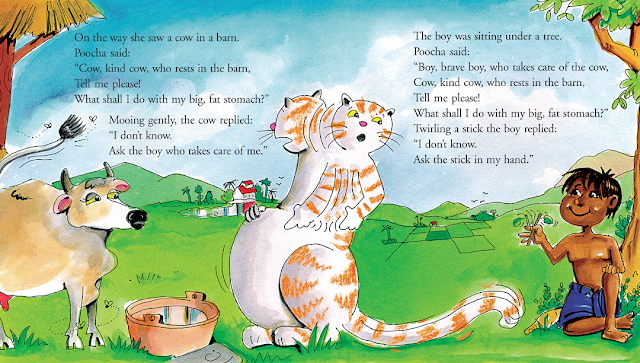 Jalebi Curls written by Niveditha Subramaniam and illustrated by Kavita Singh Kale
The raja loves jalebis. He even dreams of them. Then the dream becomes a nightmare. The brief text of this mad little book is dramatically set off by illustrations that play with curls and colours. 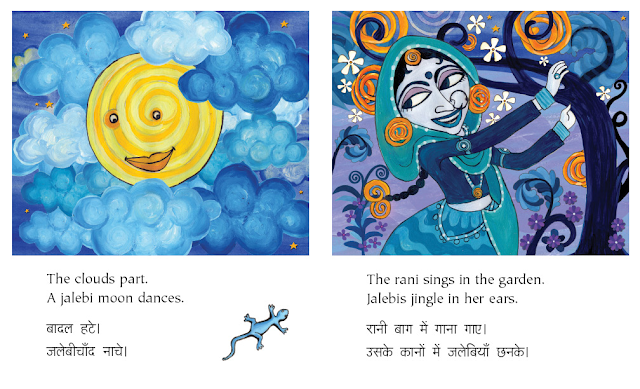 All Free written by Mamata Pandya and illustrated by Srividya Natarajan
Bhikhubhai's mouth waters for some coconut . . . fresh, juicy, grated, with a dash of sugar. But there aren't any in the house and he must go to the market for one. The problem is that he'd rather not pay for it.! This hilarious folktale from Gujarat follows miserly Bhikhubhai's desperate attempts to get himself a coconut — all free! Pictures in the book are based on the stylised painted paper scrolls used by Garoda storytellers in northern Gujarat.

Magic Vessels written by Dr Vayu Naidu and illustrated by Mugdha Sethi
Muthu, a poor playwright, his wife Chellam and six children live in a banyan tree. Chellam cooks and cleans in other people’s homes while Muthu writes plays and sometimes doesn’t get paid – life is hard for them. One day, Muthu goes in search of a job. He loses his way in the jungle and falls asleep under a tree. What happens then in this story from Tamilnadu? The Ayyanar style of sculpture from which the illustrations are adapted is rich with colour and form.

A Silly Story of Bondapalli by Shamim Padamsee and illustrated by Ashok Rajagopalan
There was once a prince who hated food. One day the royal cook gave him something new to eat... a hot golden ball, crisp outside, soft inside... a bonda! After that there is no stopping either the prince or this mad tale that rolls its jolly way to an inevitably happy, bondaful end. The jaunty illustrations pick up all the comic clues along the way, to make it a truly 'silly' story. 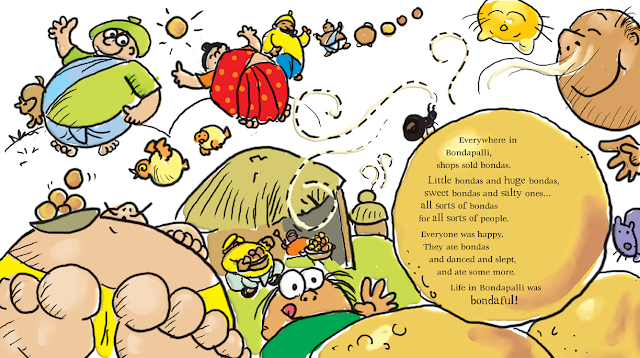