What floats her boat

The author of Satya's Boat, Nandini Majumdar, set the story in Banaras, now known as Varanasi, for love of the city and the city's boats. When we asked her how she conceived the idea behind the book, she shared some lovely memories from her childhood in Varanasi:

"I grew up in Banaras. As everyone knows, it is an old city built along the river Ganga. In the summers my family would take boat trips to the other side of the river, where the shore was sandy and the water clean for swimming. We would pack a picnic and eat our sandwiches on the way back, in the boat. There was one boatman who became our favourite – his name was Ram; he had bright eyes and crooked, stained teeth from eating a lot of paan, like any true ‘Banarasi’! Ram would tell my sister and me about the wind that day, about the fish and porpoises, and the migratory birds that  visited from as far away as Siberia.


I’ve always thought that the boats of Banaras are beautiful – some are shaded a milky blue (like the river at twilight), some are bright white with a fringe of parrot green, others are elaborate houseboats with red and black patterns. Sometimes, you can catch a group of boatmen building a new boat by the river. When you see it being formed entirely from wood in front of your eyes, you feel very lucky.

The story for Satya’s Boat, and several of the sentences I used in the final text, came to me all at once two winters ago. For me, producing a finished piece of writing is usually a painstaking process, so I was quite amazed by how this happened! But then, given that Satya’s Boat is set in Banaras and is a story about a little girl’s dream coming true, don’t you think this is fitting?

I wrote Satya’s Boat while working at NIRMAN, a non-profit NGO. The book was one of many that we created with funding from the Sir Ratan Tata Trust, all about the everyday and fantastical lives of children in Banaras. At NIRMAN, we are constantly working on projects in education and the arts with children and adults. We have two schools, a research centre, libraries, and an arts centre. NIRMAN is an exciting, busy place – I invite you to visit! 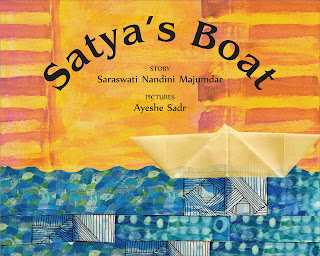 Ayeshe Sadr (the illustrator) visited Banaras to soak in its riverside spaces and create the dream-like illustrations for the book. Ayeshe studied textile design at Srishti School of Art & Design and is now an independent illustrator in Delhi. She grew up in Delhi in her nani’s house, learning dance since she was five years old, and was always surrounded by mythology, stories, and food. She was never interested in studies and thought she'd be a dancer, chef, or storyteller. Everyday she looks forward to new stories and new recipes."

Order your copy of Satya's Boat and and slip into a reverie yourself!
Posted by Tulika Publishers