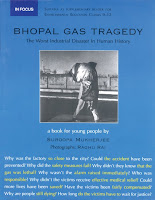 More than 25 years later, eight people have been convicted for the world's worst industrial disaster and sentenced to two years in prison. Thousands were killed in the Bhopal Gas tragedy of December 3, 1984. Warren Anderson, former chairman of Union Carbide, who now lives in suburban New York, was declared an absconder after he did not subject himself to trial in the case that began more than two decades ago.

Gautama Mehta has earlier introduced Kids for a Better Future and the work it has been doing to improve awareness about the tragedy in this blog post
You can do the same by forwarding this post and discussing the implications of the judgment. Excerpts from the book Bhopal Gas Tragedy follow...
Bhopal's history is written everywhere, in its mosques and palaces. Woven in are landmarks of recent times, such as the Charles Correa-designed Bharat Bhavan, a centre for the study of fine art and culture. Charmed by this blend of tradition and modernity, a visitor to the city will initially fail to notice the scars of a recent, devastating tragedy. On 3rd December, 1984, a poisonous gas identified as methyl isocyanate, spewed from a pesticide factory located at one end of the city. It transformed the city into a gas chamber, something like Hiroshima or Nagasaki, or Hitler's concentration camps. It killed thousands and maimed lakhs. It also destroyed the city's sense of history. For Bhopal will now always be remembered, not for its progressive past but as a wound - a grim reminder of an unimaginable human tragedy. 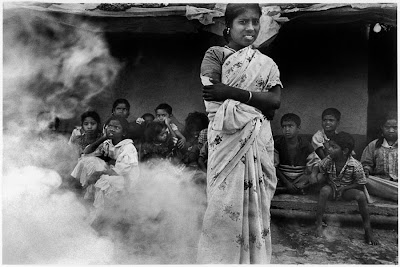 Born on the day of the gas leak, this girl was named Gas Devi, 'gas goddess', by her parents. She is 21 years old at the time this picture was taken.
Unknown to the sleeping citizens of Bhopal, a dense, whitish cloud of poisonous gases escaped into the air. From around 12.30 a.m. to about 2 a.m. on Monday, 3rd December, tank E610 emptied its deadly contents relentlessly into the atmosphere.
...
The homeless who slept unprotected on the pavements died first, in their sleep. Many of them were children. The next morning their bodies were found huddled under blankets. Women, children, the old, sick and infirm - those who could not escape quickly enough - died in large numbers.
Those who could, ran. Screaming, wailing, dragging each other, they tried to get away in whichever direction they could. In the confusion, some ran to the factory for shelter - they ran towards the gas.
What followed was an exodus of a kind a city rarely witnesses. Families were separated. Those who could not run fast enough were left behind. Women fell by the roadside. Children were trampled in stampedes as people ran blindly, pushing aside whoever came in their way.
... 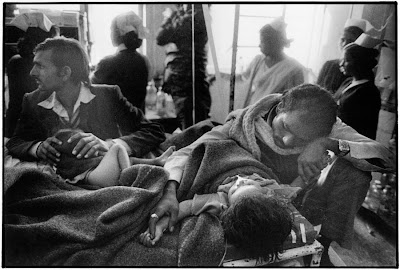 "I have treated phosgene poisoning. But methyl isocyanate is something else. I don't think anyone in India is even competent to handle MIC poisoning," says Dr. R.K. Rajnarayan, industrial health expert with the Bhopal plant from 1978-1981.
Picture shows gas affected children brought to Hamidia Hospital.
In the first two days, over two lakh people fled the city.
...

"Some time in the middle of the night I heard a lot of noise coming from outside. People were shouting 'Get up', 'Run, run', 'Gas has leaked'. I opened my eyes and saw that the room was full of smoke. The moment I removed the rug from my face, my eyes started stinging...My father refused to leave the house and my mother stayed with him, so we left them and ran towards the cremation ground. After a while my sister and my little brother got separated from us. All six of us brothers and sisters had come out together. The gas was thick and we couldn't see where they had gone. The four of us who were left, held on to each other's hands and walked on."
Ramesh, a 9-year-old child from Jayprakash Nagar, quoted in a report by BGPSSS and BGIA
...

In May 1982, just a few months before an accident which injured 16 workers, a Safety Survey Team had come from West Virginia, USA, to do a check on the plant. They noted a total of 61 hazards. Of these, 30 were major - 11 in the dangerous MIC and phosgene units. They also reported defects in the general maintenance with leaky valves and faulty gauges, and warned that a leak of enormous magnitude was possible. But the report was labelled 'Business Confidential' and kept outside the reach of all but the inner circle of company officials in the US. 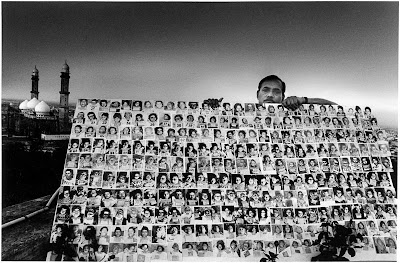 This picture shows Dr. A. Satpathy, forensic expert at Hamidia Hospital, holding up photos of the dead who were not identified or claimed. He performed more than 20,000 autopsies on victims. He said that from the autopsies, his team had discovered at least 27 harmful chemicals which could only have come from the gas inhaled by the victims. However, there was no information about the process that could have led to the presence of the chemicals.
7th December 1984
Warren Anderson was Chairman of UCC at the time. He landed in Bhopal on Friday, 7th December, to personally investigate the disaster. "We will do our part," he had promised, just before leaving the United States.
He was received ceremoniously when he landed in Delhi and escorted to Bhopal with great courtesy. Once there, the police arrested him at the airport on charges of criminal and corporate negligence, leading to culpable homicide. As head of UCC, he was responsible for the safety failure at the Bhopal plant and for the deaths of so many people.
Warren Anderson was detained for six hours in the plush UCIL guesthouse and then released on a bail of Rs. 25,000. He was whisked off under heavy security to New Delhi from where a Union Carbide corporate jet took him back safely to his country. Since then, he never appeared before court and was later declared an 'absconder' by the court - someone running away to avoid arrest.
...
Excerpts from Bhopal Gas Tragedy by Suroopa Mukherjee
Photographs by Raghu Rai

This book is invaluable as a supplementary reader for the Environmental Sciences NCERT curriculum, which now has a section for the Bhopal gas tragedy.

Union Carbide later merged with Dow Chemicals. Dow has argued that it does not own the liabilities of Union Carbide. The Political Economy Research Institute ranks Dow Chemical third among corporations emitting airborne pollutants in the United States, according to the Wikipedia entry on the company.
Posted by Tulika Publishers